The Life and Times of Food Trade Review

Eighty-three years ago, at the age of 19, Raymond Binsted who was already working with his father and brothers in their publishing business, launched a new title to cover the food industry. The title he chose was Food Canning, Preserving and Packing but by May the following year he had altered this to Food Canning, Preserving and Selling. Remember the UK was in the middle of a very bad slump and, if a small change in title helped to keep the journal alive, then it was necessary. This title was also relatively short lived because in July 1933 the title was changed to Food Industries Review. By the end of 1935 the now familiar green colour had been adopted for the masthead, although it was a dark green. Finally, in March 1939 the title was altered once again to become Food Trade Review and the green colour was lightened.

Now, whilst the economic problems had been uppermost in most people’s minds the possibility of war breaking out was another consideration but everyone needs to eat and the food business carried on. During all that time our journal reported new ideas that were being tried out and provided information for the industry.

It is interesting to reflect how many changes were occurring. Only a few years earlier Sam Smedley had opened his first cannery in Wisbech, Clarence Birds Eye had yet to commercialize the freezing of food and Earl Flosdorf had obviously not yet worked out how to freeze dry food type material. Supermarkets were totally unheard of and the packaging of food was fairly rare in that sugar, butter and other fats, dried fruit and biscuits were sold loose, and weighed or measured out over the counter. Ice cream was a novelty because of course without domestic refrigeration there was no way of keeping it. Milk bars were popular and Charles Forte, who ran one of the well known ones, went on to greater fame.

Scientific effort in the industry was somewhat limited, primarily because of lack of knowledge. Food science and technology were expressions as yet not invented but ideas were afoot because Mr Binsted was already in touch with Dr Lawrence Burton, the editor of one the American journals covering the food field. In fact, Dr Burton was one of the founders of the Institute of Food Technologists, now a worldwide organisation with some 25,000 members. Although canning was becoming a widely used method of food preservation, these were early days. Only a few years earlier Dr Olin Ball had been involved in working out mathematically how to safely can food to ensure that heat penetration had been sufficient to guarantee commercial sterility. The research station at Chipping Campden was also busy making sure that canning procedures were correctly carried out. Processed cheese was another novelty. Not many years before Bert Palmer of Swift & Co and others from the Kraft Co had discovered cheese melting salts without which you cannot prevent heated cheese from ‘oiling out.’ Another recent discovery at that time was a technique for welding aluminium and indeed stainless steel. Dr Richard Seligman, who had founded the Aluminium Plant and Vessel Co a couple of decades earlier, was involved in both discoveries and went on to invent the plate heat exchanger.

The journal proceeded to grow in both size and stature until the Second World War interrupted its progress. The founder editor, like most of his generation, was ‘called up’ then released again because of very poor eyesight in one eye.

The journal had been published from Waithman Street near Holborn Station and it was still there when the building was totally destroyed early in 1941. Luckily Raymond’s father had a large enough house in Beckenham to house a one-man business. The war years were very different because of paper rationing. Each month a journal was allocated paper, which could be any shade and or size and was certainly never what was needed. This, in turn, meant there was a queue for advertising space!

Just before the war the importation of American books on food-type subjects was begun because there were no UK books in the field at all. In fact, the small number of books published by Food Trade Review were amongst the first in the field and a separate book publishing company, Food Trade Press, was formed for the purpose.

After the war the journal continued to trade successfully and the service of bookselling was increased. When the company moved to Garrick Street, it even opened a book shop for a few years to service its customer base. As time passed other developments took place. One of the most successful ventures was to start marketing technical books published by the AVI Publishing Co Inc of America. Over a period of time they published many hundred titles, all geared to the new subject of food science or the newer one of food technology. That arrangement for selling their books lasted for nearly thirty years till the American company foundered but in that time Food Trade Press sold thousands of their books to many parts of the world.

About the same time Food Trade Review also experimented with the idea of using colour printing for editorial illustrations, a new idea at the time.

In the early 1960s Raymond’s sons Howard and Adrian joined the company and once again more new ideas were about to be tried….

COPYRIGHT 1991 Food Trade Press Ltd. No portion of this article can be reproduced without the express written permission from the copyright holder. Copyright 1991 Gale, Cengage Learning. All rights reserved. 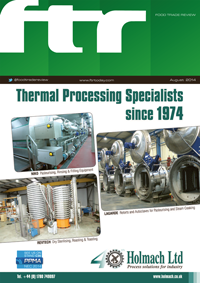 The FTR Journal and ftrtoday are published by Attwood & Binsted Ltd. “Our Family Publishing House since 1862."
Loading Comments...
Comment
×